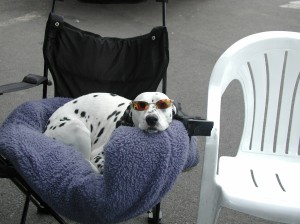 Allow me to introduce you to two Girls who have had a PROFOUND impact on my life:
NITRO~ AKA: Gregg’s Nitro Methane Lawrence & MAGGS~ AKA: Gregg’s Maggie Mae Reagan Lawrence

For those of you who’ve followed our Racing at ANY time and ESPECIALLY if you’ve EVER been by our Pits in the last 15 Years, you’re WELL aware of our love for Dalmatians- actually, for the FIRST 15 Years, it was actually DalmatiaN- as in ONE! THEN, that all changed…………………… 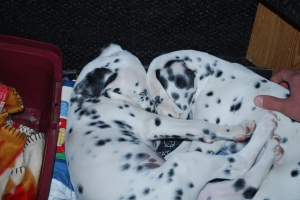 You see, in 1996, BEFORE Disney introduced the Movie “101 Dalmatians”, Robbie and I went together and picked out the most WONDERFUL Puppy- actually, in fairness- SHE picked US, as I knelt there looking over a large litter of one of the cutest sites in the world- a bunch of goofy Dalmatian Pups- and then it happened- She climbed into MY Lap- it was Love at first site. I can feel the Tears welling up even NOW, all these years later, just thinking about it! OMG, did she weave her way into our Hearts! So, She picked us and it was SET! We registered her with the AKC- “Gregg’s Nitro Methane Lawrence”. Nitro Dog, for short, went EVERYWHERE with me, traveling with me to make Sales Calls for YEARS riding “Shotgun” in the Dually. I’m QUITE confident that She TRULY BELIEVED that the Dually REALLY DID belong to her- although (for complete clarity) – she actually never did make even ONE payment on that Truck! But, to HER, it was Home away from Home, stocked with Fresh Water in a “Spill-Proof” (kinda’) Bowl; 2 or 3 reserve supplies of more Water; Her Bed- Two- one Front AND one in Back, Dog Treats (Yep- PLURAL) and several of her favorite Toys. We were CLOSE, although I never wanted to admit it, but HOLY CRAP, Batman, I had truly Bonded with Ole’ Nitro Dog! Nitro had heard all my woes; she’d been with me in all the good times and had Loved me faithfully through all the bad times. Since the earliest days, I’d taken her in for EVERY shot, extra checkups, medical needs and wants, hopes and dreams to Hoffman Veterinary Clinic on Lancaster Avenue here in Salem, Oregon. Dr. Shimek and I became friends over the years, although Nitro never seemed to bond with him NEARLY as much as I did. (I think this had SOMETHING to do with the fact that EVERY time he saw Nitro, he shoved a Thermometer up her butt! I know that would affect MY desire to bond AND even to want to come BACK, if I were her!!) Nitro NEVER lacked for care, she received the very best food, $100.00 a gallon Shampoo (she had a “Skin Condition”) and even special “Ear Cleaner”. She lived a long life, receiving an exceptionally “Clean Bill of Health” at each and every visit, even outpacing her Breed’s Life Expectancy by years. Until………

In April of 2011, just shy of her 15th birthday, Nitro had a seizure and Robbie and I KNEW something was seriously wrong. I reluctantly took Nitro Dog in to see the Doc. After YEARS of providing me GREAT news, against all odds, today was different. Dr. Shimek was now somber and even he began to choke up just a bit, as he told me that he feared that Nitro had Cancer- and if he was correct, it was a fast growing type. The diagnosis came back the next day and the News was VERY Bad. I will tell you that this Big Tough Nitro Racer- Cried. I remember distinctly looking into those Big Brown eyes, as I could see the Pain growing in her each day as she became weaker. I knew we wouldn’t have long. I hurt profoundly too.

My Mom also knew the inevitable was coming and she wanted to step in and try to bring some much needed joy to our lives. What brings more joy than a puppy! She called me one day, SO EXCITED and told me, “I wanted to surprise you, but I CAN’T wait- “YOU NEED TO COME UP WITH A NAME FOR YOUR NEW PUPPY!” There WEREN’T any Dalmatian Puppies anywhere in OREGON, so she’d found one back on the East Coast! While I wasn’t sure I was ready for another Dog yet, I knew I’d better GET ready, ‘cause she was a commin’! My Mom wanted to have the new Puppy to have time together with Nitro Dog, for Nitro to “train” the new Puppy- but time was so short.

The day came and we went to the Portland Airport to pick up our new arrival- who was arriving on a Red Eye flight! When we saw the Dog Crate and opened it- to our utter amazement, there were TWO Dalmatian Puppies in it! My Mom was SUCH a softie that she’d ordered TWO Puppies- one for US and one for HERSELF!! So, immediately, we went from ONE Dog to THREE! We named ours Maggs in keeping with our Racing theme. Mom named hers “Daisy”- not having QUITE the passion to name her DOG after A/Fuel Dragster components!! Go Figure!! 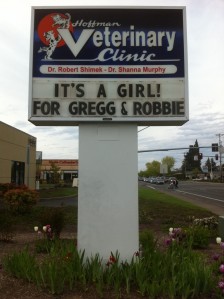 Upon arriving at our Vets office, Hoffman Vet Clinic, for Maggs first visit (and the obligatory “Thermometer up the butt probe”- for Maggs, obviously!), we were welcomed, with the most wonderful surprise – The staff welcomed Maggs arrival by announcing it to the world, or at least to all those who traveled on Lancaster Avenue for about a week, by changing their reader board sign to read “It’s a Girl! For Gregg & Robbie” We were STUNNED & Overwhelmed! We Love those guys! Everybody should be so blessed to have a Vet like Dr. Shimek at Hoffman here in Salem! WOW! I’ve included a Pic of the sign they did for us, as it meant so much to us!

One of the Pictures in our Photo Album shows a VERY small Maggs the Dog on our Bed with a very sick Nitro Dog. We had them together for 3 days before Nitro’s time with us was at an end. Nitro has a virtual “shrine” here on our property. Although deeply personal, I’ve also opted to share a picture of the board I used to cover her in her grave, on which I wrote a deeply personal message. I’m sharing it here with you all, as it means something to us, as I suspect it will to anyone who has walked through similar circumstances.

Christmas of 2011 saw one MORE addition to our Dalmatian family as Santa HIMSELF delivered yet ANOTHER addition to our brood. My Bride, Robbie now has her OWN hound Dog, aka, Dalmatian Puppy. Owing to the Christmas delivery, she was named “Holly” Dog.

We miss Nitro constantly, however, our lives are QUITE full of Maggs & Holly who are the BEST of Buds, as they romp and chase each other ENDLESSLY- our manicured Yard notwithstanding. Okay, so it was NEVER COMPLETELY “manicured”, but it was a HELLUVA’ lot nicer than it is NOW!! But, our home is FULL of two Dogs who Love us unconditionally EVERY day, good times or bad, as we Love them too. I’m thinking that’s the way God designed it. Probably what he had in mind for US too, huh? May we Love each OTHER just the way Nitro, Maggs, Holly & Daisy Love us- Unconditionally, Faithfully and always FULL of UNRESTRAINED Joy to see us!

To those new to Gregg Racing- we are all about RELATIONSHIPS- so Thanks for checking us out! We are THANKFUL for YOU! 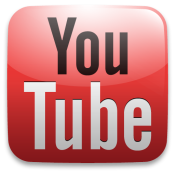 Many Thanks to Larry & Andi Mcfarland